On April 9th, 1988, a lieutenant in the US Navy was off his naval base for furlough, stopped at the Lil’ Pengiun sandwich shop and ordered a turkey sub with cole slaw and Russian dressing. He finished it quickly, and returned to base.

Exactly 30 years later, a photograph uploaded to image board 4chan showed what many internet researchers believe was a US Navy sub that had run aground on the Sandwich Islands. That sub was speculated to be carrying Nazi gold to a secret base in Antarctica – where the government was preparing to ride out supposed nuclear strike from Russia.

The captain of the submarine? S. Cole.

And the young lieutenant who ordered that sub sandwich? Nathan Gold.

Obviously, I made that up, and no such person or submarine or sandwich exists.

But it’s a decent example of one of the logical fallacies that powers the conspiracy theory movement in general, and QAnon in particular – the mistaken belief that nothing happens by coincidence or accident, that everything is planned, everything is connected, everything has meaning, and being able to game out what the connections mean is the difference between those who are awake and those who are asleep.

A perfect example of this fallacy in action could be found in the bizarre incident that took place in Washington on Friday night.

If you’ve followed QAnon at all, you can probably see where this is going.

Because QAnon does not allow for coincidences or random occurrences, the “bakers” who dissect Q drops for clues went to work.

They connected Russell to a nuclear submarine called USS Richard B. Russell, named after a long-serving Georgia senator. The Russell served from 1974 to 1994, decommissioned on June 24th, 1994 – the same day that a B-52 flying out of a Washington air base crashed just 50 feet from a secret nuclear weapons storage facility.

And what does that have to do with Q?

Only everything. First, the plane was a Q400. Second, Russell apparently flew in the shape of a Q for as long as he could. The location of the crash was near Puget Sound, site of the supposed Whidbey Island missile launch, where the deep state fired a missile at Air Force One – from a submarine.

And Q drop 952 specifically mentions a sub that “we have” in connection to the death of Electronic Frontier Foundation founder and Grateful Dead lyricist John Perry Barlow. 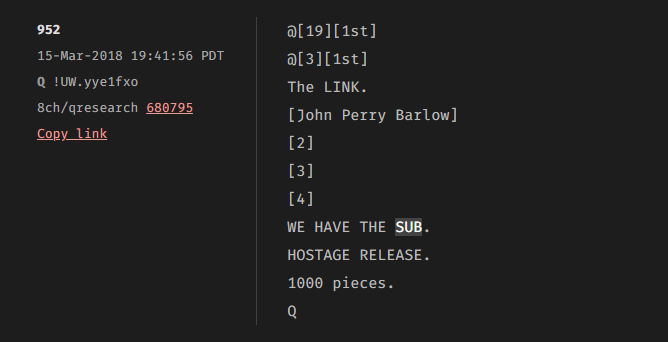 What does it all mean?

To Q bakers, it meant that the Richard B. Russell not only wasn’t scrapped, but was still in service – but working for the CIA. And it was that boat that launched the fateful missile that nearly took down POTUS.

And pilot Richard B. Russell, flying an aircraft with a Q in its name in the shape of a Q, directing our attention to a remote area near where the submarine had fired – and doing maneuvers he had no training in.

@DilaraEsengil Anyone else find it a coincidence that the #Q400 flight/crash was right next to the #QAnon so called missile test during the @potus #NorthKorea trip? And the pilot made a giant Q pic.twitter.com/tk1aOOKGEp

Bakers dug up references that Q had made to the movies IRON EAGLE (about F-16 pilots) and THE HUNT FOR RED OCTOBER (about a rogue submarine).

They looked for biographical information on Richard B. Russell – only to find none.

Senator Richard B. Russell was on the Warren Commission, prevented from telling the truth about JFK’s murder by the CIA – who now had a submarine named after that same person, trying to take out another president. And that “1,000 pieces” quote in Drop 952? Spoken by JFK.

Was the plane remote controlled by white hats or black hats?

Was the USS Richard B. Russell used to attack @POTUS?

Did white hats use Q400 plane, to send message to Deep State? Or vice versa?

It had to be something HUGE. Because to QAnon, everything has meaning.

The Russell incident is a great example of how conspiracy theories arise out of incidents that don’t make any sense, and how we grasp for meaning in their minor details.

We don’t know why Russell did what he did, or why he chose that plane. It’s a senseless, idiotic way to commit suicide. Who would do that?

1.) Let’s discuss the Name Richard Russell..You know.. that guy who “stole an airplane”and then “crashed”it out on some island in Washington..

Do you believe in coincidences?
#QANON

No right thinking person would. Hence, the incident has deeper meaning. It has to.

But all the dots that QAnon believers are trying to connect don’t make a picture – they just make connected dots.

It’s not like “Richard Russell” is an uncommon name. And no matter what the pilot’s name was, Q fans would connect him to someone with the same name, and concoct a conspiracy theory to fit that name. That’s how bad logic works. The result has already been determined, only the process remains to be filled in.

But beyond that, what is the connection between the two that can’t be written off via coincidence? The “Whidbey Island missile launch” has no proof of actual existence, and there’s no proof that the submarine Richard B. Russell wasn’t scrapped. What does any of it have to do with anything? Nobody can say. It just does.

Q bakers bolster their theory by claiming it’s impossible for a ground crew member to steal a plane, but this isn’t true either.

Popular Mechanics found five other incidents since 1969 where a ground crew member stole planes, either crashing or landing them safely.

The random bits of information keep piling up in reddit threads and tweets, but in the end, all the QAnon believers have is their fervent notion that there are no coincidences, that everything related to the incident has meaning, and they’re the only ones who understand it. Random bits of information are not a theory – they’re just noise that contains no signal.

The alternative is that a mentally disturbed guy hijacked a plane, took off, flew around, and flew it into an island – putting countless people in danger for no apparent reason.

Faced with the idea of a random plane plunging into my house because some guy wanted to kill himself, I’d probably concoct a crazy conspiracy too.

2 thoughts on “The Sea-Tac Plane Crash: No Coincidences”