On October 9th, the US Marshals released a statement announcing the successful carrying out of an operation called “MiSafeKid” in the Detroit area.

The press release touted the location and recovery of 123 children that had gone missing, all found and accounted for in one day in late September.

They represented a little more than a third of 300 case files of children in Michigan’s Child Protective Services who had been reported missing at some point and for whom CPS didn’t have a current address.

123 missing children have been found by US Marshals during a one-day sweep in a single county in Michigan — including three potential victims of sex trafficking. https://t.co/XIdhmEoKGW pic.twitter.com/d1QnuVNCyP

Obviously, anything that leads to the recovery of missing children is something good. But because so many modern conspiracy theories revolve around exaggerated claims of “child sex trafficking rings,” stories like this also inevitably wind up as fodder for un-evidenced accusations and bizarre plots.

And so the story of the 123 recovered children was almost immediately grabbed by QAnon followers on Twitter and Voat as “123 children saved from sex trafficking rings.”

Believers effusively thanked President Trump, claimed the kids were rescued from a pizzagate-related trafficking ring, and represent a massive blow against the deep state’s horrific exploitation of children.

Obviously, none of this is true. It’s helpful to advance a particular narrative of “Donald Trump is single-handedly smashing child sex trafficking cabals,” but it also obscures the far more mundane (but no less important) truth of what actually happened.

We already know that the right wing meme of sex trafficking/pedophilia arrests being way up during the Trump years isn’t true, and is inflated by arrests of adults for prostitution.

Beyond that, the Marshals’ own statement makes it clear that these were children who had been reported missing at some point, and whose whereabouts were unknown. Many were found simply by going to their last known address or their school. While all were interviewed about sex trafficking, only three showed any signs of being involved in illegal sex work.

The Marshals worked with HUD, the Inspector General’s Office, and a slew of local police departments. Donald Trump had nothing to do with this, nor is there any reason why the president would have any jurisdiction on local missing persons cases.

There’s no evidence in any of the press releases or stories about this event that recent executive orders on human trafficking had any role in this operation – and the US Marshals were involved in only a few of the rescues.

The other accusation leveled by conspiracy theory believers was another standard claim: that the mainstream media wasn’t covering the story, and was actively running cover for sex traffickers.

Of course, this isn’t true either.

Local news stations across the country covered the story, usually printing variations on syndicated stories that came from Michigan. The reason it didn’t get much coverage on national news is that it’s a local story. Why would CNN cover the recovery of missing kids in Detroit?

Stories like this play into all of the worst aspects of right wing conspiracy theories. They turn everything into some kind of battle in the imaginary war on sex trafficking. They give outsize credit to Donald Trump and steal the spotlight away from local law enforcement. And they feed the far right’s persecution complex that the media won’t cover anything good that Trump does. 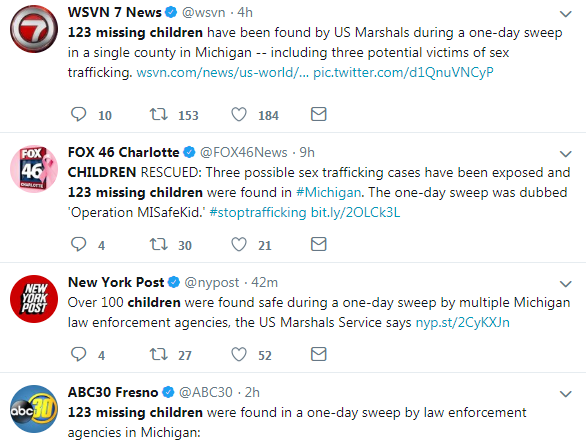 123 kids whose location was unknown and are now located is good news. But feeding it into the endless churn of dangerous conspiracy theories like QAnon or pizzagate is inaccurate and unhelpful.

A good thing happened in Detroit this week. Chalk it up as a win for the good guys, and move on.

5 thoughts on “Did Donald Trump Rescue 123 Kids From Traffickers in Detroit?”