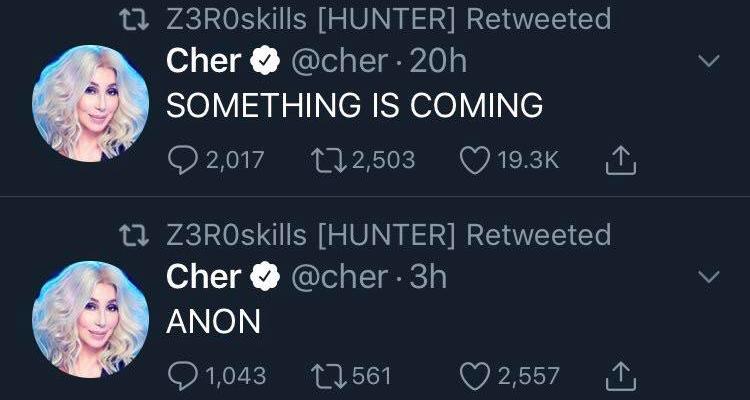 One word. That’s all it took for the QAnon movement, desperate for something massive to break through the endless cycle of hope and disappointment, to latch on to entertainment icon and *flaming* liberal Cher as their latest and greatest hope.

And given the word, it’s no wonder.

In the classic (ie, before the internet) sense, the word “anon” simply means “soon” or “shortly.” But in the internet shitposting sense, it means anyone who wants to keep their identity anonymous. QAnon followers are often called “anons” and before Q came on the scene, there was a host of other “secret government insiders” dishing out “inside info” going by code names like “FBI Anon” and “WH Insider Anon.”

To make things worse for Cher (not that things are bad for Cher by any distance), the immediate tweet before she declared “ANON” uses another QAnon catchphrase: the declaration that “something is about to happen.”

So when Cher, a huge icon of entertainment, uses two different QAnon catch phrases, it gets attention among people who see hidden clues in virtually every public post that a celebrity makes. With the kerfuffle over James Comey’s tweet (not) tipping an attack on the Blue Marble Jubilee long in the past, and the “controversy” over Tom Hanks taking a picture of a glove (and therefore tipping his murder of actor and Pizzagate figure Isaac Kappy) not catching on, the Q community needed something to buoy their fading hopes.

And that something, apparently, was Cher.

There’s no indication that Cher has any link to QAnon, knows what QAnon is, or is involved in any secret alliance with President Trump or military intelligence. In fact, it’s pretty clear that she hates the man’s guts, calling him an “ignorant thug,” a “lizard brain,” and a prolific liar.

And yet, it’s admittedly a little weird that she would tweet out two conspiracy theory code words one after another (though they were separated by 18 hours), right? It probably does seem both weird and ominous if you’re a person who soaks in conspiracy theories. This is a realm where nothing is just what it is, and everything has hidden meaning – from typos in Trump’s tweets to a celebrity taking a picture of a glove to mentions of “pizza” in an email.

But it’s also a community soaked in disappointment, like every prosperity scam before. The great big event never arrives. The instant wealth doesn’t materialize. The mass arrests don’t come. The people are never awoken. When you put everything you have into a theory, and the theory never comes to fruition, you understandably start seeing every sign that it MIGHT as a sign that it IS.

It’s not surprising that this uptick in random hail mary passes coincides with Q going nearly silent. In fact, since a spree of posts on March 29th, Q has posted less than two dozen times, with many of the posts having virtually no effort put into them. Gone are the long slabs of rhetorical questions, the puzzles, the codes for anons to decode and interpret. The Q poster seems to have lost interest in the con, but the conned haven’t lost interest in Q.

And so, they grasp at straws. They see false flags in tweets, murders in Instagram pictures, and now, the conversion of a celebrity to their ranks thanks to two tweets.

Make no mistake, the belief that Cher is on the Q team is grasping at the shortest straw you can find.  But that’s what QAnon believers do, and what QAnon gurus live off of: the false hope that “something big” is just around the corner. So keep digging and memeing, anons! Eventually, the hammer will fall and the booms will come. Just not today.

And what exactly was the “something big” that Cher said was coming “anon?” Was it “declas?” Was it “D5?” Was it the sealed indictments being revealed?

Nope, it was perfume.

I’VE BEEN WORKING ON MY
PERFUME FOR FOUR YEARS‼️
MY ”ONE”CRITERIA…..
“WHEN”I”❤️TO WEAR IT…
I’LL BE READY TO SHARE IT”

You see, way back in 1987, Cher got into the perfume game with “Uninhibited.” It had a big burst of popularity, then vanished after its parent company got bought up. So apparently she’s going to release a new scent, though details are scant.

That’s your big event, anons. Perfume. No Hillary being frog marched through the streets, no mass gallows set up on the South Lawn. Nothing.