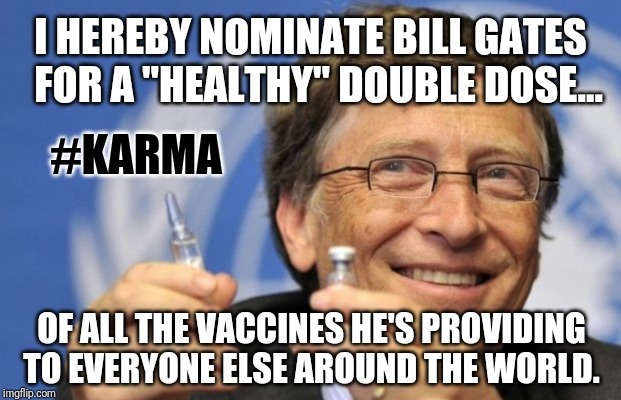 As the coronavirus pandemic continues to turn our brains into glue, sap time of all its meaning, reduce our capacity for empathy and common sense, and send American conservatives protesting in the streets for their right to get sick and die; one figure has emerged out of the mist as one of the chief culprits for the madness.

No, it’s not some Chinese scientist hunched over a microscope, fusing bits of SARS and HIV to make a bioweapon. And it’s not Barack Obama, silently commanding his Deep State hordes to destroy President Trump’s rebuilt economy and re-election chances. It’s not even some “European banker” tossing out bundles of cash to help bring down the Jesus-loving masses with their chicanery.

Bill Gates has been loathed in conspiracy circles for years thanks to his advocacy for vaccination in the developing world. Gates has spent as much as $40 billion of his own fortune in donations to the Bill and Melinda Gates Foundation – but to anti-vaccine conspiracy theorists, Gates isn’t a philanthropic titan, but a budding eugenicist working his way toward a global genocide of useless eaters.

I wrote about the Bill Gates/mass murder conspiracy theories back in 2013. Back then, there were already countless Facebook posts and memes about kids being forced to take vaccines at gunpoint, his “tainted polio vaccine” killing or paralyzing “half-a-million” children in India, forced adoption of GMO foods, and worst of all, a quote from a 2010 TED Talk where gates seem to be pushing a global population reduction of “10 to 15 percent.”

All of that is nonsense, of course. The polio vaccine that Gates has funded has all but wiped out polio in many countries, while rumors of vaccination-at-gunpoint and GMO’s being crammed down our throats are just that – rumors. Even the TED talk quote is totally innocuous when taken in its proper context: that vaccines and improved public health reduce birth rates, because families that don’t have a child die young tend to have fewer children.

This planned requirement to get vaccinated for air-travel by 2022 would impose severe restrictions on non-vaccinated people. This violation of civil rights and human freedoms is clearly an important ‘stage’ in the global “vaccination genocide.” https://t.co/KUWNfurx0T

Of course, all of that was before Bill Gates became the focus of a furious movement putting him at the center of the coronavirus outbreak. Hysteria over Gates, his funding of a potential COVID-19 vaccine, and his nebulous, never-proven role in the pandemic has fueled an endless brain-mush of conspiracy theories and misguided protests. And it’s all based on a totally fact-free accusation that Gates wants to wipe out humanity to further his own ends.

Nothing could be less true.

Almost as soon as the pandemic broke out in Wuhan, Gates was connected to the virus thanks to an ever-expanding circle of tenuous conspiracy theories, nonsense, wishful thinking, anti-vax hysteria, and right-wing media-driven loathing. They’ve been debunked up and down the internet, and I’m not going to rehash all of it here.

But to be clear, there’s no evidence Gates “patented the coronavirus,” that he’s using a potential vaccine to cull humanity or track the survivors with invisible tattoos, or that he’s funding the rollout of 5G internet so that he can advance his evil plans to monetize the treatment for the disease he created.

And for that, Gates must be arrested and brought to justice. By someone. For something. Who would arrest him and why? That’s not clear.

You really can’t make this stuff up.

Another “liberate” protest in Texas.

To let you know just how nutty and deep in conspiracy nonsense they are.
pic.twitter.com/hjTR7iWQsx

The fact is that Gates has donated tens of billions of his own dollars to help combat the things that actually *do* kill people, particularly in poorer non-white countries, where people don’t have the luxury of protesting in the streets because their favorite nail salon or gun range will be closed a few more weeks. That philanthropy has saved at least 122 million lives, by one 2017 estimate. The number is probably higher than that.

Conspiracy theorists can flood the internet with as many rumors, memes, fake stories, defamatory Instagram comments as they want. They can spam Gates’ social media accounts, hold up misspelled signs at protests, and refuse to take any vaccine that Gates has any link to. They can express their outrage at their pretend oppression because they aren’t spending their time and energy battling polio, trudging miles to get clean water, or eking out a subsistence living. Bill Gates is actually doing something about this.

In fact, if Gates is carrying out a large-scale genocide of humanity, he’s going about it all wrong – and taking decades to do it. All the while, the population goes up, making Gates “goal” that much harder to achieve. You’d think he’d get on with the purge already.

The Evolution Of #BillGates New #BenGarrisonCartoon "Bill Gates is not a virologist. He’s not a medical doctor. He doesn’t even have a college degree. His Foundation owns and controls vaccine makers, as well as patents on viruses.." read the rest at
https://t.co/eesTXb9wB2 pic.twitter.com/MKYhKQqaqF

This is the same problem that other “massive human cull” conspiracy theories have: they’re too slow. The Agenda 21 conspiracy theory has been around since the early 90’s, with its UN-led population purge always just around the corner. And despite a neverending series of technological panics about new gizmos that will be forced on us so that the elites can track us (RFID chips, tattooed barcodes, smart meters, WiFi, etc), the great tracking and herding never arrives either.

That’s not to say there aren’t legitimate criticisms of how the Gates Foundation works. It lacks public oversight, has donated to corporations it also holds stock in, and often gives massive tax breaks to Gates. The Foundation has been accused of being too big, too focused in technological solutions, and too tied in with major corporations that are themselves a major reason why the problem of economic inequality persists in both the industrial and developing worlds.

Bill Gates is so nice. He has even funded geoengineering, chemtrails and haarp. Not only is he trying to depopulate the world by mandatory poison vaccines. Hes also helping block out the sun & weakening our immune systems!!https://t.co/HQuYIClJxp

All of those things can be true, while simultaneously not proving any of the lunatic rumors of Bill Gates wanting to kill billions of people and track the survivors like cattle. If Gates is able to direct his funding toward a vaccine for coronavirus, it will go a long way toward returning the world to the state it was in before the pandemic hit. It will put him even farther away from achieving his “goal” of whatever it is conspiracy theorists think he wants to do.

If you want to help people get through this pandemic, there are ways. Donate to someone making a difference in your community, be nice to essential workers, tip big when you spend money, or just observe social distancing. Those things can help others.

Don’t make a sign about how Bill Gates wants to put a chip in your head and kill your family with his vaccine. Don’t spread conspiracy theories that do nothing but confuse and scare people. Don’t make things worse. And don’t pretend that you’re some kind of a digital soldier fighting for freedom by calling a philanthropist worse than Hitler.

Whatever you think you’re doing to help,  you’re not.