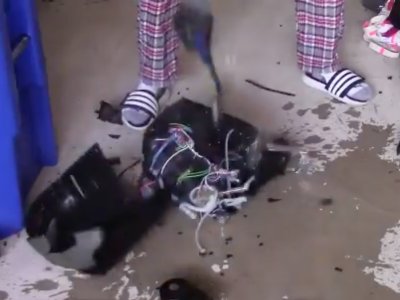 Did you smash your Keurig machine this weekend, to protest the company pulling their ads off Sean Hannity’s show?

Then congratulations, you’re an idiot. You destroyed a piece of property worth hundreds of dollars to boycott a company that already has your money, in order to defend a conservative infotainment character who is, in turn, defending a man accused of preying on an underage girl.

So good for you. You’re dumber than dirt, and got played by a conman pretending to be a radio personality.

If you have no idea what the boycott Keurig thing is all about, then congratulations also go to you, because you live a healthy, balanced existence where right wing demagogues can’t talk you into smashing your stuff.

It’s not clear how many people have actually done this, or if it’s just a few videos getting a ton of viral play, which got picked up by major media outlets because of just how stupid the people involved are.

The few videos that are circulating are from the usual rabidly pro-Trump, and anti-brain trolls that spam out thousands of tweets per day in support of their lord and master.

Beyond that, a big chunk of the posts under #BoycottKeurig have the unmistakable patina of Russian troll farms, what with their slapdash memes and being overstuffed full of hashtags.

HAY #BOYCOTTKEURIG
GOOD JOB LETTING THE MINORITY TELL U HOW TO RUN UR BUSINESS AND PISS OFF THE MAJORITY #DUMBASS pic.twitter.com/mgPyJAXizH

Even so, it’s clear at least some people have done this. And these people are idiots.

For one, this is not the way boycotts work. A boycott means to avoid purchasing a product or using a service for political purposes, and in doing so, damaging the company’s finances and possibly forcing them to change their ways.

A boycott is NOT destroying something you’ve already bought to stick it to the company you bought it from.

The ridiculous drive to hurt Keurig by destroying already-purchased Keurig machines isn’t even the first conservative boycott a product by purchasing that product.

Remember #BoycottStarbucks? That was the one from the beginning of this year when conservatives vowed to get back at the coffee giant for promising to hire 10,000 refugees. They bought Starbucks coffee and poured it down drains, which not only made Starbucks more money, but got liberals to counter the protest by going to Starbucks when ordinarily liberals don’t do that kind of thing.

Or remember a few months before that when conservatives vowed to #BoycottStarWars because ROGUE ONE was supposedly reshot to include anti-Trump scenes? Not only did those scenes never exist, but ROGUE ONE got free publicity that launched it to a massive box office that wasn’t affected in the slightest by the “boycott.”

Or when conservatives registered their outrage against the NFL by burning their already-paid for NFL gear? Yeah, that was a Swiss watch of a plan.

Buy Starbucks so you can have them Trump write on the cup.

Buy NFL merch so you can burn it.

Buy a Keurig so you can smash it.

I can't wait for @MercedesBenz to pull ads from Hannity's show so I can watch people take bats to their cars.

The point of these “boycotts” is not to hurt anyone’s bottom line, nor to cause social change. It’s to get cheap clicks and publicity. On that score, they work for the people who start the ball rolling. For the shmoes who destroy their Keurigs or dump the latte they just bought…not so much.

What’s actually working is the effort to damage conservative infotainers by hitting them were they hurt the most: their coffers.

Sean Hannity isn’t calling for people to smash Keurigs because he thinks it will hurt them. He’s scared shitless of more companies fleeing his show, and having to work a little harder to shill his lunacy to the rubes who lap it up.

And I’ll drink a big mug of steaming coffee to that.

2 thoughts on “Congratulations, You’re an Idiot”