President Trump, in case you hadn’t noticed, has trouble spelling. He constantly misspells words on his Twitter account, and when he’s not doing that, he’s butchering the rules of grammar and word usage. Just this weekend, he misspelled his own wife’s name when announcing she was coming home from the hospital.

Most observers have written the constant sloppiness off to a president with no filter and no staff around him to vet tweets, a small and harried White House staff, and a general lack of attention to detail.

But what if the misspellings are actually more than that? What if they’re a secret code meant to convey information to a select group of woke patriots?

This is the theory that followers of the online conspiracy theory #QAnon have embraced. The person or people behind the mysterious, anonymous “Q Clearance Patriot” have twice claimed that “misspellings matter,” once on March 3rd, and once on April 12th.

And posts by #QAnon believers are rife with “examples” of how Trump’s errors are actually secret codes or clues that only people awake to the conspiracy will be able to find. Not only that, but the misspellings are proof that Trump knows Q is dropping intel, and this is his way of passing even more intel to Q without anyone knowing.

This is a perfect example of how conspiracy theories reward confirmation bias. #QAnon followers are already predisposed to see secret knowledge and codes all over the place.  So rather than see Trump’s misspellings as a bug, they’re seen as a feature.

They’re proof that Trump hears them, understands them, and is fighting for them – rather than just a careless president with big thumbs and no filter. After all, Trump making mistakes because he’s not good at communication would puncture the myth of Trump as the savior of mankind.

Hence, misspellings matter. And if Trump misspelled his wife’s name, well, he must have done it on purpose.

#qanon #FollowTheWhiteRabbit If anyone has any doubts about the legitimacy of Q at this point, these tweets from @realDonaldTrump should remove all doubt. Notice the missing “Q” in “consequential” in his tweet. He corrects it 6 minutes later. pic.twitter.com/T4bbNnEgLV

Yes, he added a Q to the word “consensual.” But to what end? Q claimed it was to “train you to understand how to understand the correlation between posts and Tweets.” But how does it do that? What does it signify? Of course, Q doesn’t bother explaining that. Because Q doesn’t actually explain anything, he just throws things out and waits for his slavish followers to make up their own explanations.

Just this weekend brought another typo in a tweet full of odd capital letters and ramble – with Trump adding an extra “s” to “collusion.” The tweet has been up for over a day, and likely will remain – Trump tends to either correct tweets quickly, or never correct them.

….At what point does this soon to be $20,000,000 Witch Hunt, composed of 13 Angry and Heavily Conflicted Democrats and two people who have worked for Obama for 8 years, STOP! They have found no Collussion with Russia, No Obstruction, but they aren’t looking at the corruption…

So, another sloppy misspelling? Not according to #Qanon believers, who claimed that the extra “s” indicated a secret date. Or something.

Hey genius … it's NOT only a typo … make your brain crawl outside the box … expand your thinking … oh wait, thinking and reasoning don't fit the liberal narrative … @realDonaldTrump #Qanon #ObamaGate

One more recent example was when Trump butchered Chinese premiere Xi Jingpin’s name, then corrected it a few minutes later. Was it just the president doing his thing? Or was it a secret reference to Veterans Day, when Trump is supposedly going to have his big military parade?

Maybe it is…but why? What’s the point of making an embarrassing error related to a rival’s name to make a reference to something six months away?

This is just the tip of the iceberg in relation to the massaging of Trump’s tweets to fit the #QAnon narrative of a secret genius dropping clues to his woke followers.

Time and time again we see mistakes that have no comprehensible explanation other than sloppiness, and an explanation provided by those who don’t think the president is capable of making such mistakes.

It’s all part of an incomprehensible numerology based on timestamps, codes, secrets, and psuedo-military speak. 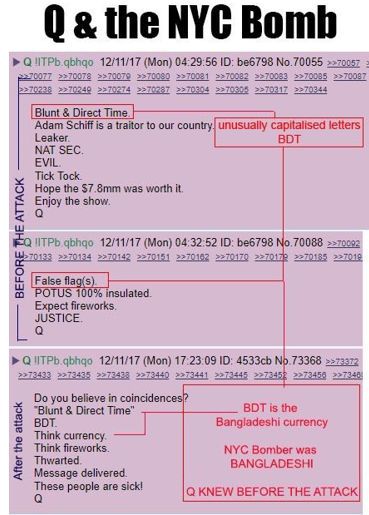 If you’re not in on the joke, it looks like the ravings of paranoid shut-ins who think their toaster is listening to them.

Even for me, someone sympathetic to conspiracy theorists and the reasons for their beliefs, it’s gibberish based on wishful thinking and confirmation bias.

But if you’re in on it, it all makes sense to you. It’s order found in chaos.

And in that respect, it’s a perfect explanation for why the most powerful person in the world can’t spell the First Lady’s name correctly.

"Misspellings matter" This was a message but probably only a few people know what it means. #QAnon #GreatAwakening #melaniehttps://t.co/edoZ4yVEiY@RawStory pic.twitter.com/MmEDKbu7jX

The name coming out is Melanie Newman, a senior DOJ official that worked with Loretta Lynch. This information shows misspellings should be looked at as information being disseminated! #maga #qanon

After all, taking down the deep state is as good a reason as any to get your wife’s name wrong.

The Boston Globe broke a story on the day this was published that Trump has increasingly relied on staff members to write tweets for him to send, and his staff has, in turn, tried to mimic the president’s poor grammar and sentence structure.

The story even alleges that Trump staffers misspell words on purpose – not to convey a secret code, but to better imitate the president and because they “believ[e] that debates over presidential typos fortify the belief within his base that he has the common touch.”

Still, experts quoted in the story believe that it’s likely any Trump tweet with a picture or hashtag came from his staff, while the long rambling paragraphs that come in early morning bundles likely come from Trump. These are the posts that tend to have the most misspellings – and would be the most likely to contain secret messages.

One thought on “Trump’s Typos: Sloppy Communication, or Secret Codes?”