He came into the world concocting a bizarre scheme where Hillary Clinton and John Podesta were going to be secretly arrested, with the National Guard called up to quell the massive riots that would ensue. It didn’t happen.

He predicted the sham Devin Nunes memo would bring down the deep state. It didn’t happen, and it didn’t happen with the Department of Justice Inspector General report after that, and FISA declassification after that. He’s predicted wars, terrorist attacks, mass suicides, catastrophic falls of public figures, and government purges – none of which took place.

QAnon believers mostly sweep these failed predictions aside, claiming they were thrown out there on purpose because “disinformation is necessary,” or forgetting about them altogether.

But when Q gets one right, or even appears to get one right, they see it as one of the innumerable “proofs” that Q is real – and crow about it endlessly.

#QAnon predicted McCain’s death 30 days before it happened. Coincidence? Watch closely as other high profile political and financial figures begin to die either naturally, mysteriously or by committing suicide. This is only the beginning. #Pain

When I confront QAnon believers over the lack of compelling evidence that their conspiracy theory is anything more than just that, they almost always use Q’s “prediction” of John McCain’s death, made in two separate posts, to try to prove me wrong.

So what really happened with this prediction. Did Q actually predict John McCain’s death down to the minute?

No, he did not – unless you call yourself a champion darts player if you throw 100 darts and happen to hit a bullseye with one.

The first post Q believers point to is 1649, from June 30th, which makes a reference to the upcoming (and still pending) Supreme Court confirmation vote, claiming that “no name” (Q’s preferred nickname for the Arizona senator) would be taking action, and that “every dog has its day.”

The second supposed “prediction” is Q post 1706, which went up at 4:28 PM Pacific Time on July 25th, and claimed “No name returning to headlines” with a picture of McCain speaking, eyes closed and hands up. 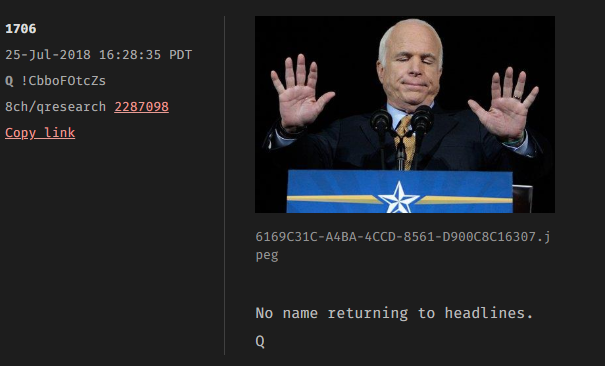 McCain died on August 25th, at 4:28 Mountain Standard Time – indeed, exactly one month after Q’s prediction. And one day before International Dog Day, on August 26th.

So what exactly did Q predict?

McCain’s death? No. He predicted only that McCain would be “returning to headlines.”

Q did not predict McCain would die. He only predicted SOMETHING would happen that would involve McCain.

How did Q time his death by posting 30 days b4 every dog has his day (McCain) down to the minute. Coincidence? How many more coincidences does it take before it’s mathematically Impossible? McCain was the first traitor to go. Many more will follow. Light always beats dark #QANON

He also did not predict the time frame for this “return to headlines.” Post 1706 doesn’t give any sort of timeline at all. It could have been a week, or two weeks, or two months.

That’s not a prediction. It’s simply a fact. John McCain was a fixture of the US Senate, and suffering from severe brain cancer. His death was a foregone conclusion, the only question was when it would take place. Q happened to make a post exactly one month before it happened – but that post made no concrete mention of McCain’s death.

Again, this is throwing 100 darts at a dartboard and one of them hitting a bullseye. It’s what a storefront psychic does, spamming out vague predictions until they happen to get one right, then jumping all over it.

The “every dog has its day” bit is also irrelevant, since National Dog Day was a day after McCain’s death. Close, but no cigar.

Since the “prediction” came true, Q has thrown in a little post hoc evidence that he was right, in that it was exactly 30 days between Post 1706 on July 25th and McCain’s death on August 25th.

But even this isn’t true, since it’s actually 31 days from July 25th to August 25th.

QAnon wants you to believe that he knew down to the minute (well, not really, since he was a month off) when John McCain would die – therefore McCain’s death was preordained, and his cancer likely faked as a cover story for his execution.

This dovetails nicely with Q believer predictions that McCain was executed, and the day of his dispatch was known to higher-ups in the Trump administration.

But this is, of course, totally dependent on facts not in evidence. It depends on wishful thinking and motivated reasoning – belief that McCain was a traitor, proof from Q that traitors are being executed, and proof from Q exactly when it happened.

That proof, such as it is, is proof of nothing other than if you guess enough, you’ll eventually guess correctly once.

2 thoughts on “QAnon Did Not Predict John McCain’s Death”