How many people believe in QAnon? That’s a good question, and one that is basically impossible to answer.

To start with, activity in QAnon tends to ebb and flow, with Q going silent for a while, followed by dozens of posts and furious analysis by acolytes – only for Q to go silent again.

Believers likely think it’s because Q is gathering the intel he drops on his following. Skeptics might say it’s because Q only posts when something happens that he can use to retroactively prove his own existence.

They also argue among themselves endlessly over whether or not “something big is happening” and what the plan is.

I did a Twitter thread on this that got picked up by some big news sites, and got a truly insane Neon Revolt article written about me, as well. So RIP my mentions.

Thing seemed to have calmed down a bit, and believers are even finding moments of levity and triumph in the wake of Q’s absence.

One of them was this post on Voat, about the size of the QAnon movement – which appears to be huge:

This implies that every month, 6.5 million people go to QMap.pub, the biggest clearinghouse of Q posts, analysis, lists, and other Q-related stuff.

If that’s true, then the Q movement is truly massive, with literally millions of people hanging on Q’s every word, ready to march into meme battle at a moment’s notice.

So is it true? Are there really more Q followers than there are people in Missouri?

As with everything Q related, it’s hard to tell. But it’s pretty easy to tell that “6.5 million monthly visitors” does not equate to that many followers.

Let me say up front that 6.5 million monthly visitors is a lot. It’s way more than I get here at my humble site or YouTube channel, which you should subscribe to.

Let’s first briefly discuss what the difference between is a page view and a page visit is. According to NetworkSolutions.com,

A page view is a visit to a page on your website. If the visitor reloads a page, this counts as an additional page view.  If the user navigates to a different page and then returns to the original page, this will count as another page view. A visit is defined as a sequence of consecutive page views without a 30-minute break. A visit always contains one or more page views.

The graphic on the Voat post shows visits – not visitors. So those 6.5 million visits could have been from a far smaller group of people going to the Qpub site again and again and browsing its many different pages – which seems likely during periods where Q is posting a lot.

Also, the graphic in the post shows visits over six months TOTAL – not monthly. Again, an average of a million visits per month is a lot. But it’s not 6.5 million.

Beyond that, the majority of the growth stems from the period of July to September – as QAnon was having its big moment in the sun after the late August Trump rally that hit the media. 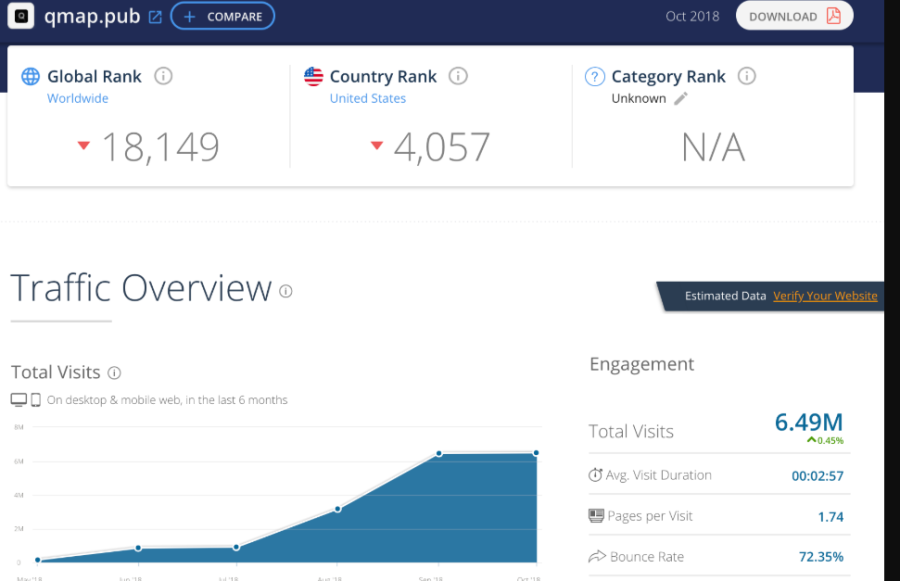 It leveled off considerably since then, and QMap currently has about 100k people online looking at it – likely a combination of true believers and web crawler bots. Most people likely went once, spent little time on the site and moved on – which you can see from the site having less than 2 pages per visit.

So if QAnon doesn’t have 6.5 million believers, how many does it have?

Trying to tell how many people use 8chan’s QAnon forum is impossible because it’s totally anonymous. But there are a few clues we can work from.

But before it got shut down, the major QAnon thread on Reddit, r/greatawakening, had about 70,000 subscribers. Its subsequent version, the Q-endorsed Voat thread QRV, has 14,000.

Not only that, but the vast majority, or about 11,000, subscribed in the first few minutes after r/greatawakening was shut down. How do I know? As the anons say, check the sauce.

On the other hand, maybe the leading QAnon decoder on YouTube, a guy who calls himself Praying Medic, has 196,000 subscribers on his YouTube page.

And Voat is not a site that attracts casual believers, due to the unrelenting racism and antisemitism of its content.

So where does the truth lie? I have no idea, and I can’t pretend I do.

The QAnon movement is a small core of hardcore believers, with a large population of fence-sitters that drift in and out based on media coverage of Q.

Now, dislodging that hardcore group from their mistaken beliefs is a totally different subject, and something I’m currently working on (check out my YouTube channel!!)

But at least we can agree that it’s a low number, and not in the millions.

7 thoughts on “How Big is the #QAnon Movement?”