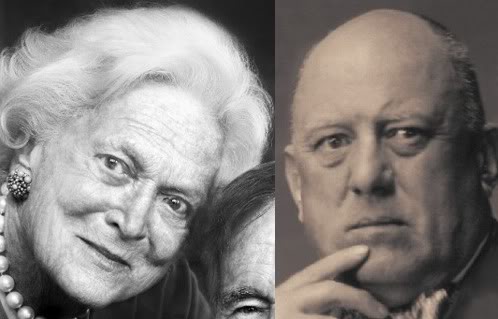 Like every event everywhere, the death of former First Lady Barbara Bush became an opportunity for conspiracy theorists to spout ludicrous accusations against a person they view as part of the “wealthy elite” controlling the world.

Mrs. Bush died on April 17th at the age of 92, of natural causes. There is nothing the least bit mysterious about her death, and there was little controversial about her life.

Yet there were members of conspiracy theory communities who immediately started the churn of salacious rumor that accompanies the daily grind of news.

Here’s a rundown of the most oft-mentioned Barbara Bush conspiracy theories, and whether they have any truth to them.

Barbara Bush was the daughter of occult legend Aleister Crowley

This is a surprisingly virulent rumor that’s been around for quite a while. As the story goes, Mrs. Bush’s mother Pauline Pierce was living in Paris in the early 1920’s, at the same time as Crowley was experimenting with the intersection of sex and magic. They “partied together” in August 1924, she moved back to the U.S., and eight months later, Barbara was born in New York.

The “evidence” purports to be supposed diary entries from Crowley at the time, as he was carefully documenting each sexual conquest he racked up; along with a “strong resemblance” Mrs. Bush had to Crowley.

Obviously, physical resemblance is in the eye of the beholder, and can be influenced by confirmation bias. So that leaves us with the diaries, and as a Crowley biographer told Gizmodo a few years ago, there’s actually no mention of Pauline Pierce in any of Crowley’s writing.

There’s actually no evidence at all that Pierce and Crowley partied together, or even met at any point. Beyond that, the timeline doesn’t match up at all, as Pauline Robinson had married Marvin Pierce in 1918, and already had two children when she would have been grooving at occult sex parties in Paris. Did Marvin just shrug off his wife’s affair with Crowley and raise his kid as theirs? Seems unlikely.

Finally, Gizmodo found evidence that the “rumor” was not something floating around at the time, but was conjured up only in 2006 – likely as an April Fool’s joke.

None of that makes it impossible that George W. Bush is the grandfather of the greatest mind in the history of the occult movement, of course. It just means there’s no evidence it’s true, and a great deal of evidence that it’s not.

Shortly after the news broke that Mrs. Bush had died, the White House released a statement expressing their condolence. One thing stood out about it – it got the date of her death wrong, being off by a year.

Trump’s statement on the death of Barbara Bush: pic.twitter.com/vO1efJcJje

Normally, this would just be another instance of the sloppiness with which the White House conducts itself, constantly screwing up names, making typos in official releases, and butchering the English language with aplomb.

But conspiracy theorists don’t view anything as coincidental, so the use of “2017” in the statement was immediately declared to mean something by followers of #Qanon.

In particular, numerology was seen as a culprit, with “17” appearing to be an important number in the supposed global takedown of the deep state Trump is leading.

Was April 17, 2017 some significant day for Trump or the “deep state?” Not particularly. There was a press briefing that day. Mike Pence started a ten-day trip to Asia. Is any of that more or less meaningful than any other day?

That question doesn’t matter, because #QAnon is a conspiracy that takes everything and assimilates it into its own mythology. So when an Air Force plane had to return to base that day because of smoke in its cabin? That’s the deep state at work, mucking about with military planes. And it’s “significant,” because Trump drew our attention to it.

#QAnon
On 4/17 17 members of Delaware Nat Guard 142nd 142nd Aeromedical Evacuation Squadron were taken to hospital after smoke on AC that took off shortly after 7 pm
Disaster averted.
Plane/17https://t.co/MKZdxFWh1S

Or maybe it’s just because Q is the 17th letter of the alphabet, and Trump was sending a secret thumbs up to his 4chan acolytes.

Take any day of any year, and find something you can work into a conspiracy theory. That’s what “17” is about.

This is an offshoot of the botched press release from the White House. What if Mrs. Bush actually did die on April 17th, 2017? What if the news was withheld from us for a year for some mysterious and horrible reason?

Is it reasonable that the White House would make such a simple mistake and not act on it for hours? What are they really saying?

This has been up for an hour and a half.

It’s still up. A mistake like this wouldn’t happen…and still be up.

What is this signifying? 17? When did she really die? How much have we seen 17 around lately…#BarbaraBush https://t.co/jP4OS1wE6I

Then there was the CBS press release announcing Mrs. Bush’s death – two days before it actually took place. Did someone know something the rest of us didn’t?

Again, even the most cursory look for evidence puts a pin in this particular balloon. For one thing, while many people are claiming she wasn’t seen in public after that date in 2017, that’s not true at all. There are numerous photos of Mrs. Bush in public between April 2017 and April 2018. Here’s one, from October:

Here’s another, of Mrs. Bush taking in a Houston Astros game that fall:

Here she is at 92 in 2017 enjoying her favorite sport, baseball.
She loved her pearls too, saying they did a great job of hiding her wrinkly neck.

Politics aside, this woman was a class act. Prayers to the Bush family on such a sad day.#AmericasGrandmother pic.twitter.com/yzkNFXoaVK

Sure, maybe they’re all fake. Maybe they’re of a carefully cast double, meant to make us think Barbara Bush was still alive, rather than having been hanged at dawn for Satanic sex crimes.

Or maybe…hear me out here…maybe the Trump White House couldn’t find its way out of a wet paper bag and messed up.