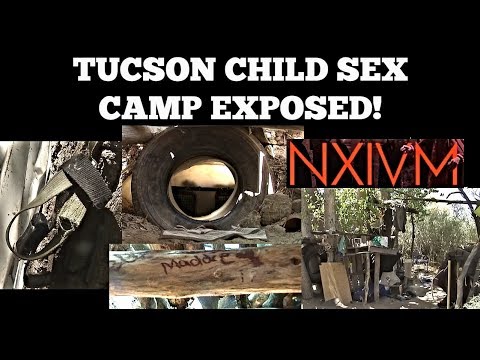 Conspiracy theorists and patriot groups have spent the week occupying an abandoned cement plant outside Tucson, thinking that what’s actually a homeless encampment is a secret haven for child sex trafficking. According to them, the site is funded by George Soros and the Clintons, watched over by a member of the Rothschild family, and is nothing less than a hellhole of child rape, slavery, and murder.

First emerging earlier this week, case has coincided with the return of anonymous conspiracy avatar QAnon, creating a feedback loop of accusations and plots.

As I wrote on Monday:

[According to] local news outlet KGUN,Veterans on Patrol claims to have found the bunker and notified not the police, but a different group of veterans – a former Navy SEAL named Craig Sawyer who is the head of “a documentary crew traversing the country to expose the dark side of human trafficking.”

Sawyer also claimed he found what he described as a “rape tree” with various straps on it, and a cave that had several dressers in it – large enough to hold a child, apparently.

Shockingly, this evidence has not been turned over to local police, but is being “stored in a private area,” out of the view of both authorities and reporters.

Since Monday, no new evidence has emerged supporting the assertion that the camp is a sex trafficking site. The area has been deluged by militia members, patriot groups, and volunteers – many of them heavily armed. At one point, a human skull was found, which was immediately deemed to be that of a child.

But Tucson police and federal officials continue to declare that the site is a homeless encampment, and the detritus found there is entirely consistent with what would be found at a homeless camp.

On May 29, 2018, the Tucson Police Department responded to the site of what appeared to be a one-time homeless encampment located on… https://t.co/tsBggbDeLQ

In fact, Tim Steller, a writer for tucson.com, interviewed one of the homeless men who lived at the camp, who said that the straps were used to hang tarps up, not as part of a “rape tree.”

Before the internet, this would have been a local story for a day. Now, it’s an international conspiracy burning up message boards and social media with frenzied videos and posts, calls for help, asks for money, and anguished monologues – all in service of something that’s not actually happening.

Obviously, child trafficking is real. Nobody thinks otherwise. But in the case of Tucson, it’s clear that there are multiple tragedies at play that have nothing to do with non-existent trafficking rings.

The first is the need for elaborate homeless camps.

Homelessness has become an epidemic in America, with 2017 seeing an increase in people with no home for the first time in over a decade. Major cities are struggling to keep up with burgeoning tent cities, encampments, and enclaves. Rising rents, flat wages, lack of affordable housing, and low turnover among renters have all pushed more and more people onto the streets, with almost every major city seeing an increase.

Here in Los Angeles, there are 55,000 people who sleep on the streets. Their tent cities are everywhere, full of the kind of detritus and improvised shelters that are all over the encampment in Tucson.

We have an active, real-life QAnon-based standoff in Tucson, where complete dipshits believe an abandoned homeless camp is a pedophile ring.

And while countless conspiracy theorists might have an obsession with the pedophilia they see everywhere, it’s clear that this habitual need to protect children doesn’t extend to the homeless – as one in 30 American children slept on the street at least once, according to a 2014 report.

The second tragedy is the skull, and why it was there.

According to Pima County authorities, the skull was found between 20 and 30 miles from the camp, and after an examination, and belong to an adult.

That skull was likely the remains of one of 40 migrants who died in that remote part of the Arizona desert just in 2018. And it’s just one of 2,800 sets of remains found there since 2,000.

There have been more than 2,800 sets of human remains discovered in the Southern Arizona desert since 2000. That skull was discovered nowhere near the supposed child-sex-trafficking site — 20 miles away.

The wastelands of Arizona have become a graveyard for migrants crossing the Mexican border, driven there by increased border security in California and Texas. They trek north, with little food or water and no way to know where they’re going.

Re-entering the US after being deported is a felony, and many migrants, deported from the country they’d lived in and paid taxes in for decades, simply can’t take the risk of crossing anywhere other than the most desolate places.

That skull was a person, a person who likely died alone, thirsty, and terrified. Their family probably will never know what happened to them, and they’ll continue existing only as a bone in a box in a room somewhere, unknown and forgotten.

In the first five months of 2018, we have documented the deaths of 1,401 people who lost their lives seeking to escape conflict, violence and poverty, in their search for a better life. Behind each death there is a family, a friend, a partner, looking for their missing loved one. pic.twitter.com/OOXhRpbFzF

Advocating for victims matters. The homeless are victims. The dead migrants found in the deserts wastes are victims.

2 thoughts on “The Real Tragedy in Tucson”