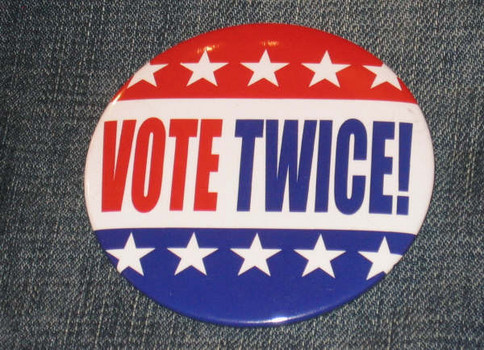 Every election cycle seems a little more beset by conspiracy theories, outrageous and unfounded accusations, and bizarre plots. They get weirder, and yet more normal at the same time.

The conspiracy theory community has mobilized to support Donald Trump and his fellow Republicans. And they’re going much further than anything that happened to John McCain in 2000,  desperately trying to shore up their support with suburban white women by terrifying them into a thinking a rape caravan of ISIS invaders is (very slowly) making its way north to take their jobs, force them to drive electric cars, and treat refugees humanely.

But one day before the election, polling for the House of Representatives doesn’t look good, nor does it look good for Republicans to keep their death grip on state legislatures.

And if there’s one thing conspiracy theorists are good at, it’s making excuses for why the stuff they theorized didn’t come to pass.

Every citizen who cares about America must not only vote, but take personal responsibility to make sure a friend, neighbor, or relative votes as well. #Republicans must be proactive, because Democrat voter fraud will surely be rampant, as usual. #VoteRed #VoteRepublican2018 https://t.co/fDQLGVHr6h

So here are a few of the most prevalent excuses you’re likely to see on conspiracy theory social media if the election really does go the way it’s looking:

Voter Fraud – Overwhelmingly, this seems like the excuse that far right conspiracy theorists are going to use for why they lost. They actually DID win, but all those illegal votes (of whom nobody can prove the existence of) cost them everything.

No less than President Trump himself has already started laying the blame at the feet of ILLEGAL VOTING, which he’d previously blamed for losing the popular vote in 2016.

Law Enforcement has been strongly notified to watch closely for any ILLEGAL VOTING which may take place in Tuesday’s Election (or Early Voting). Anyone caught will be subject to the Maximum Criminal Penalties allowed by law. Thank you!

But his acolytes on social media, mainstream and swamp-gas alike, have also already started blaming voter fraud for the losses that the (fake news!) polls are forecasting.

Just on alt-right Twitter Xerox Voat, these threads blare dire whines of massive voter fraud just about to be uncovered:

PARTY OF CRIME: BREAKING: Democratic Party of Georgia is under investigation by the State Department for attempting to hack Georgia’s voter registration systems.. ELECTORAL FRAUD RAMPANT IN USA!!!

Mexican National convicted of Voter Fraud in Ohio —- made over 1,000 fake IDs

This is, of course, nonsense. There have been dozens of studies tracking votes cast by non-citizens, people pretending to be other people, and people voting multiple times.

And in every case, the numbers are infinitesimal.

A report by the non-partisan Brennan Center found that voter impersonation happens at rate of between 0.0003 percent and 0.0025 percent. A Washington Post study found just found 31 credible claims of voter fraud from 2000 to 2014 – representing more than 1 billion ballots cast. And two Arizona State studies found just ten claims of voter impersonation in the first decade of the 21st century.

Even the claims that were found in these studies were likely the result of clerical errors or bad data, rather than double or fraudulent votes.

If Republicans lose the House and more, it won’t be because of illegal voting.

Real Conservatives Were Too Intimidated by Antifa Thugs to Vote – Don’t laugh. This is the primary narrative that conspiracy theory avatar QAnon is pushing out.

Now "Q" is telling QAnon believers that antifa are going to be out on election day intimidating voters. pic.twitter.com/wcMYa2a8xf

This is an offshoot of those lunatic conspiracy theories that got blown massively out of proportion after two (yes, two) members of the New Black Panthers party were filmed outside a polling place in Philadelphia in 2008, one of them holding a club.

Of course, any voter intimidation is bad. But this case, which was dismissed by the DOJ, was seen correctly as political theater meant to cast the Obama administration as some kind of socialist radical gang.

As for the Antifa thing, is has almost no imprint outside QAnon social media, with believers reacting with everything from vows to grab their guns and patrol polling places to telling us not to worry about it, because God is in control.

It’s All Part of the Plan – If Republicans lose, expect a good number of conspiracy theorists to simply write it off as all part of the increasingly complex chain of events that has to take place for “The Storm” to be unleashed.

“Trust the Plan” is a big part of QAnon’s lexicon, essentially absolving believers of any critical thinking or questioning by saying that whatever happens is all part of the great scheme that Q is laying out.

This allows for disappointments, failed predictions, and inconvenient outcomes to be swept away as just more pages in the great script Q is writing. Hillary didn’t get arrested? Part of the plan! Trump cronies are getting picked off one by one by indictments? Trust the plan! Democrats took the House? Trust the plan!

Expect to see this A LOT in the days after a potential Democratic win. It’ll all be written off as part of whatever bigger picture Q and Trump are working on. Don’t worry, it’s all under control. There’s a plan. Trust it.

Of course, if Republicans manage to hold on to the House, liberals will come out firing with excuses as to why THEY lost.

But most of them probably won’t involve club-wielding thugs and anonymous conspiracy avatars.